COMMUNITY CONNECTED, INSIDE AND OUT

Diverse and inclusive, the way a community should be.

FOUNDED ON NEW URBANIST PRINCIPALS AND DRIVEN TO BRING PEOPLE TOGETHER.

In community-building, home is the ‘first place’ and work is the ‘second place’. But it’s the ‘third places’ - the gathering spaces in which we laugh, eat, and socialize - that truly strengthen a neighbourhood's bond.
Outdoor pavilion with Canopy Park's toboggan hill in view.

Shaped by the sum of its parts.

Walkable links connect you to wherever you want to go. Wide paths safely set back from the street weave through beautiful green court parks. Architecture favours porches over poured driveways.

Safety and quality of life go hand in hand – in Alpine Park, the very nature of the community design improves overall safety for the people living here.

We focus so much on what’s inside our homes we forget how much our happiness with where we live is tied to not just granite countertops or wide plank flooring, but to neighbours that wave hello, and having friends nearby that you can lean on.

Your outdoor space isn’t limited to the boundaries of your property. Step into your community and enjoy wonderful park spaces, unique amenities, and incredible views.

People spend so much of their money seeking inspiring places to visit and wonderful food to eat, yet we’ve grown numb to living in neighbourhoods full of garage doors. Streetscapes in Alpine are genuinely beautiful and crafted for those that matter most – the people living here.

So much of what brings us joy is the simple act of moving. Whether it’s varied exercise or just changing our scenery, movement matters. A truly walkable community is one where you have both things to walk to and walking itself is more enjoyable than a drive.

Extra separation between people walking and cars not only makes for a more pleasant pedestrian experience – it’s safer, too. If a nearby driver fails to pay attention, the treed planting strip makes injury far less likely than walking right ‘beside the road’.

With trees planted alongside each road instead of sidewalks, roads feel less wide, despite being the same size, reducing the ‘natural speed’ with which cars drive.

Cars routed to back

With the majority of residents arriving home and turning down rear lanes to park into their garage, front streetscapes carry less daily traffic making roads safer for children wandering the community.

While reducing conflicts between people and vehicles is important, avoiding them altogether can make a dramatic difference, especially for children. Alpine Park’s interconnected green court system allows residents to walk throughout the community entirely off-street.

Used throughout the community, bump-outs increase safety for people in the community by shortening distances needed to cross roadways, increase pedestrian visibility, and encourage vehicles making a turn to slow down. 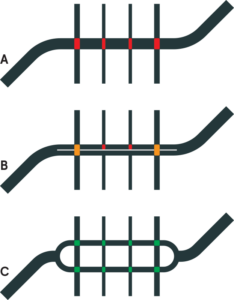 Traditional roadways (A) require full light cycles and can back up previous intersections. Pedestrians crossing the wider spans have a lower quality experience and are at higher risk. These create a significant barrier between the neighbourhood north and south of the road.

Couplet roadways (C) provide space of value on three areas of the roadway; north, south, and within the middle of the couplet. Crossings are kept shorter and made more pleasant for pedestrians, and vehicles do not have to queue in order to turn, keeping traffic flowing more readily.

Eyes on the street

With nearly all of the homes in Alpine Park featuring garages in the back as opposed to attached to the front, people are more aware what is going on in the community in front of them. Neighbours recognize when someone looks suspicious, and front doors are more visible.

Homes in Alpine Park feature James Hardie or stucco siding, greatly reducing the likelihood of ignition during a fire. Plus, with many homes offering rear detached garages, hazardous materials can be stored separate from your home, reducing risk to occupants.

Porches are the perfect middle-ground, a space where neighbours can say hello without having to be welcomed inside, and yet where you can spend time without feeling obligated to chat. In communities that lack these important spaces, you simply get fewer opportunities to engage.

Cars in their place

People in Alpine Park don’t just pull into the garage and disappear – they spend time in front, with less traffic on the road and a more enjoyable place to walk or visit.

Having places to gather where others gather too is important. Kids meet other kids in the neighbourhood. New moms feeling overwhelmed meet other moms going through the same new experiences and learn to lean on one another. Alpine is built for the best kind of run-ins – at the community garden, sitting at picnic tables, along intersecting pathways, or while taking the dog to the park.

A connected place with middle-grounds that let you break the ice or gathering spaces where you can run into those that live beside you lead to the greatest amenity Alpine Park can offer – neighbours you get to know and care about.

Shared interests
Viewpoints
Local parks
For the many, not the few
High street
Wilderness in the city

Common areas for common interests, like community gardens, or playgrounds where parents can meet while kids play.

There’s nothing more rewarding than rounding the corner and taking in an incredible view. We can’t all have mountains out our windows, but with roads laid to maximize views of the city and open spaces like Skyline Pond offering views of the Rockies, these moments are available to us all.

Places close to home to run into friends, throw a ball around, or have a larger family gathering than your own back yard can bear.

For the many, not the few

Alpine’s parks encircled by roadways and built for the enjoyment of the whole community, without the awkward spaces created when the rear yards of properties back onto them – a clash of private and public spheres where people using the park feel uncomfortable ‘intruding’ on the space of the owner, and owners feel overly ‘exposed’ to the pedestrian traffic behind them.

Feel like a morning perk up? Walk to the Village Centre, grab a cup of coffee, and enjoy the morning air in the urban square. Or join friends for dinner on a patio.

Wilderness in the city

Authentic and varied styles, premium materials, but most importantly – homes that focus on spaces and features for people first and foremost. Porches rather than pavement. Windows instead of flat garage doors.

Without driveways consuming everything but a narrow strip of green sod, front yards in Alpine Park become extensions of each resident’s outdoor living space – styled to enhance the charm of each home and reflective of each homeowner’s personality. Flower or vegetable gardens, xeriscaping or prairie grasses, pine trees or aspens.

Think of any classic Halloween or holiday movie, and images of pumpkins on the porch, string lights around columns. or a wreath over your door come to mind – not laser lights on the garage.

Nearly all roads in Alpine Park have at least two rows of 70+mm trees in planted strips between the sidewalks and the roadway, with greenway roads featuring three rows. This beautiful treescape will establish as the community ages and create a remarkable framing for community life under the canopy.

On road or off
Side-by-side
Follies
Cut-throughs

On road or off

Sidewalks set back by treed boulevards from the road make for more comfortable walks without the worry of cars whizzing by. Or disconnect yourself entirely from the roadway and stroll the string of pearls park system through pedestrian-only green court parks lined with the porches of beautiful homes.

Walk shoulder-to-shoulder or stroller-to-stroller along wider pathways and enjoy higher quality quality-time while catching up with friends.

With something interesting around ever corner, from information markers, to rock formations, to a community fireplace, there’s always a reason to keep moving forward and mix up the paths you take.

Sometimes we run out of time for the scenic route. With pathways optimized for getting around on foot, you don’t need to go around entire blocks just to get where you’re going. Cuts through parks, or in the middle of blocks, are smartly placed to make walking as convenient – or as leisurely – as you want.

Part of a bigger picture.

While Alpine Park will offer provide whatever residents need close to home, adventuring out is as easy as heading onto the newly expanded Stoney Trail. The new ring road offers a 70% reduction in travel-time to Calgary’s downtown, which means commuting or visiting friends or family is easy.

Dinner out with friends or family in a unique historical pedestrian mall.

Easy visits with inner-city friends, be it brunch or spa days.

Stroll around the neighbourhood and grab a coffee.

Wilderness at a whim, with hiking and camping in the summer and skiing and snowshoeing come winter.

Take in 16km kilometers of trails around Calgary’s largest body of water.

Hit the stores in Calgary’s landmark shopping and entertainment district.

All of life’s essentials around the corner.

Thank you
for subscribing